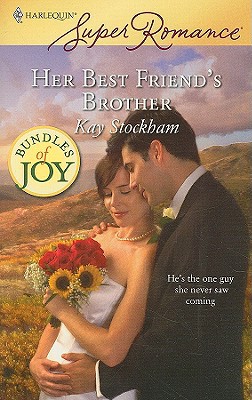 How could this have happened?

They had one night. That's all Shelby Brookes would allow herself to indulge in with Luke Tulane. Yes, he's gorgeous. And yes, he's the greatest guy she knows, but he's her best friend's brother, for crying out loud! She's pretty sure there are rules against sleeping with friends' brothers.

Then Shelby discovers she's pregnant. And Luke's determined to do the right thing--down to the bended-knee proposal and the meeting at the altar. As tempting as his offer is, Shelby's convinced she's not the marrying kind. She's bound to hurt him, and that's definitely against the rules of friendship. Still, she doesn't count on how persuasive Luke can be when he really wants something...her.
Reviews from Goodreads.com

How could this book be in a series called "Bundles of Joy"?
There is no bundle whatsoever in this book. Much less one of joy. At most there is a stain on some clothes and a car seat that once used to be an embryo. With no real hope of a re-do.
I feel cheated by both the author and whatever people decided to put this book in a series with this name.
Note to self: Avoid Kay Stockham and be wary of this series.