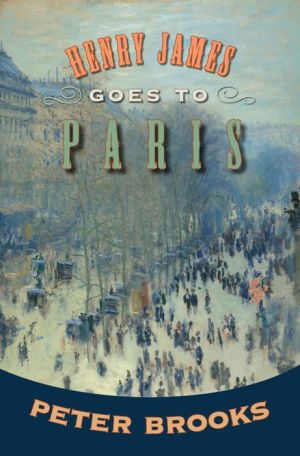 Henry James's reputation as The Master is so familiar that it's hard to imagine he was ever someone on whom some things really were lost. This is the story of the year--1875 to 1876--when the young novelist moved to Paris, drawn by his literary idols living at the center of the early modern movement in art. As Peter Brooks skillfully recounts, James largely failed to appreciate or even understand the new artistic developments teeming around him during his Paris sojourn. But living in England twenty years later, he would recall the aesthetic lessons of Paris, and his memories of the radical perspectives opened up by French novelists and painters would help transform James into the writer of his adventurous later fiction. A narrative that combines biography and criticism and uses James's writings to tell the story from his point of view, Henry James Goes to Paris vividly brings to life the young American artist's Paris year--and its momentous artistic and personal consequences.

James's Paris story is one of enchantment and disenchantment. He initially loved Paris, he succeeded in meeting all the writers he admired (Turgenev, Flaubert, Zola, Maupassant, Goncourt, and Daudet), and he witnessed the latest development in French painting, Impressionism. But James largely found the writers disappointing, and he completely misunderstood the paintings he saw. He also seems to have fallen in and out of love in a more ordinary sense--with a young Russian aesthete, Paul Zhukovsky. Disillusioned, James soon retreated to England--for good. But James would eventually be changed forever by his memories of Paris.
Reviews from Goodreads.com