Henrietta Sees It Through — Joyce Dennys 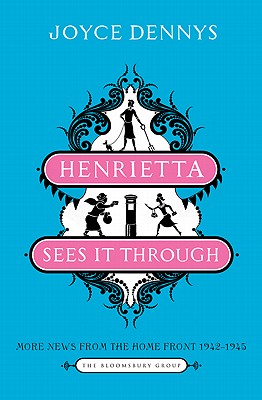 World War II is now in its third year and although nothing can dent the unwavering patriotism of Henrietta and her friends, everyone in the Devonshire village has their anxious moments. Henrietta takes up weeding and plays the triangle in the local orchestra to take her mind off things; the indomitable Lady B, now in her late seventies, partakes in endless fund-raising events to distract herself from thoughts of life without elastic; and Faith, the village flirt, finds herself in the charming company of American GIs. With the war nearing its end, hope seems to lie just around the corner, and as this spirited community muddles through, Lady B vows to make their friendships outlast the hardship that brought them together.

Joyce Dennys was born in 1893 in India. The Dennys family relocated to England in 1896. Dennys enjoyed drawing lessons throughout her schooling and later enrolled at Exeter Art School. As she got older, her drawing took a backseat to the domestic and social duties of a mother and doctor's wife and she became increasingly frustrated. She voiced her frustrations through the character of Henrietta, a heroine she created for an article for Sketch. These writings were later compiled to form Henrietta's War, first published in 1985.