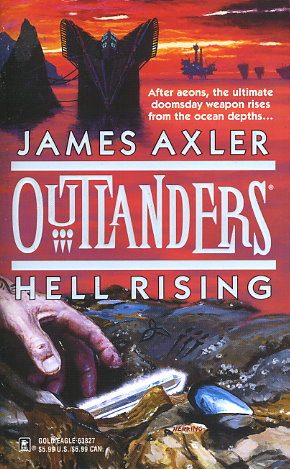 CATACLYSM
The Nukecaust radically altered the face of the globe, and even the secret malevolent architects of mankind's history could not predict the will of the human spirit to survive--and to rebel. As earth's destiny remains pawn to sinister forces not of this world, an underground resistance movement is fighting back against the ruling barons and their hidden masters. Kane, once an enforcer of the evil he now seeks to destroy, is joined by his compatriots in a brutal, covert war to reclaim the future for its rightful owners.

FIRE STONE
A fierce bid for power is raging throughout new empires of what was once the British Isles. Into this wild land born of myth and madness, legend and chaos, hell itself has been rising from the ocean depths. The force of the apocalypse has released an ancient city, and within its vaults lies the power of total destruction. In times past, Kane spilled his blood to save this land. Now he must challenge the forces who would harness the weapon of the gods to wreak final destruction.

In the Outlands, the victor inherits the gruesome power of hell....
Reviews from Goodreads.com