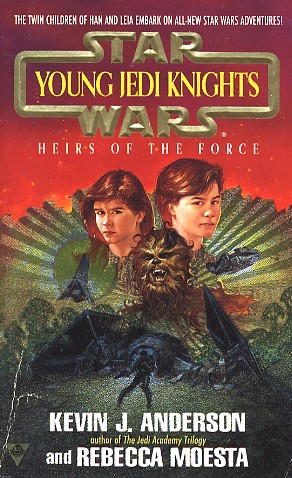 JACEN and JAINA
When the Empire died, they were born--a new hope for the New Republic. The young twins of Han Solo and Princess Leia have grown strong with the Force, thwarting the evil Nolaa Tarkona and destroying the Emperor's plague. Now, with their friends Lowbacca the Wookiee and Tenel Ka, the future heroes of an already legendary saga continue their training.

While exploring the jungle outside the academy, the twins make a startling discovery--the remains of a TIE fighter that had crashed years ago during the battle against the first Death Star. Mechanical whiz Jaina thinks she can repair it...if they can sneak the right parts from the academy.

Meanwhile, their work is being closely watched--but not by academy eyes. The original pilot, an Imperial trooper, has been living wild in the jungle since his ship went down. Waiting to return to duty. And now his chance has come...
Reviews from Goodreads.com