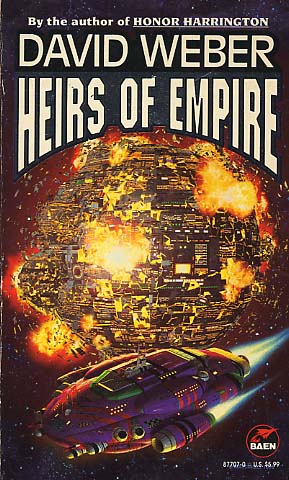 For really tough jobs, Emperor Colin the First is your man. The only person in the galaxy ever to stop the genocidal Achuutani, he went on from there to resurrect an empire that died forty-five thousand years ago. He's still got a few problems--like a traitor out to murder him and three-quarters of a billion of his subjects--but if anyone can handle the job, it's Colin.

But the rest of the galaxy better brace itself, because his progeny are on the way. Not that Sean and Harriet aren't nice kids; it's just that they've had a bad day. They're a long way from home, marooned with a blown up starship that's left them stranded on a theocratic world of gunpowder and pikes, and Mother Church of that world doesn't like them very much. In fact, she's declared them demons, proclaimed Holy War, marshalled the Holy Host, and ordered them exterminated.

You might think that things look pretty bleak for the kids, but in reality it's Mother Church that's in trouble--because Sean and Harry are chips off the old block--and they're about to get angry....
Reviews from Goodreads.com