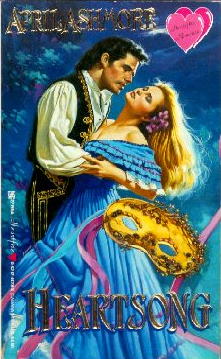 FROM A BRITISH BOARDING SCHOOL TO THE RUGGED CALIFORNIA FRONTIER, SHE FOUGHT FOR A DANGEROUS LEGACY OF LOVE.

Clad only in a nightdress, her rifle aimed straight at their hearts, Savanna Storm defied Los Sombras, the notorious bandits who'd ridden onto the Vista Del Sol Ranch in the dead of night. Raised in a London boarding school, the headstrong beauty had journeyed over an ocean and crossed prairies and deserts to claim the remote California cattle ranch . . . and she wasn't about to be bullied off her land now! Let the other ranchers quake in their boots --- she'd defend her home with every last breath in her body.

But Savanna had no defenses against Monheno Devilla --- the enigmatic, dangerously sensual Spaniard who killed without remorse even as he promised her protection. Who was Devilla? Rescuer or seducer? Enemy or lover? Savanna only knew that his touch made her tremble with fear . . . and desperate desire. But that was before she was kidnapped by a masked outlaw, before she became hostage to a passion that could destroy her --- or awaken her heart to the promise of rich, endless love.
Reviews from Goodreads.com