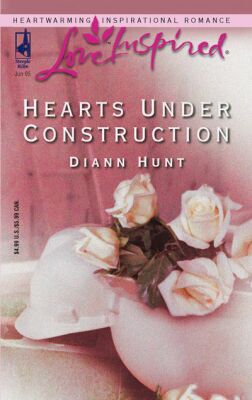 An unexpected turn of events gives Ellie Williams's coveted promotion at Wiley's Dream Homes to aggravating newcomer Coleman Preston. All Ellie had wanted was to be a success at work -- that, and maybe a lifetime supply of chocolate. But of course her colleagues are only too happy to have an attractive new boss. Like she'd ever want a man like that!

Yet to Ellie's surprise, the challenge of facing Cole brings new light to her eyes and some liveliness to her carefully ordered world. With changes in the air at work and new houses under construction, it looks like Cole's next project could be...Ellie's heart.
Reviews from Goodreads.com

What can I say about Ellie? She's great! She thinks she needs to loose weight and so is always going on these strange diets: cabbage, tomatoes, eggs...But in truth, she loves chocolate (what woman doesn't?). Ellie has it in her head that her friend, Jax, is going to offer her partnership in the company. Boy, is she ever disappointed when Cole gets it instead. She does not like changes, yet Cole seems to love them.

Cole likes change and adventure. He's a live-on-the-edge kind of guy. Cole isn't happy if he has to stay in one place too long. This is just a temporary partnership after all!

Everybody in this story is great! There's Alex, who's a pretty interesting character. Whoo boy, but wait until you meet this piece of work! Then there's Caib, Cole's twin brother. He sure puts a twist on Cole and Ellie's relationship!

The story is exciting enough. I laughed out loud several times. There is plenty of action to keep one wanting to read, and that's for sure! I read this book in one day, it was so interesting...There's a mystery (though I knew who it was from the very beginning) of someone sabotaging the company. I love how everyone suspects each other.

The only issue I had was that up to the very end, Cole and Ellie were blaming each other. I can understand this, but I'm not sure if they were ready for engagement. I think they should have agreed to date for awhile. That's one thing about these love inspired books - the aurthor usually has them engaged at the end instead of just dating...