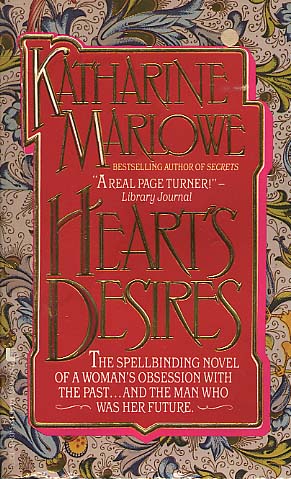 Raised by a woman whose obsession with finding "Mr. Right" destroyed her, Alyssa believed herself doomed to repeat her mother's fatal mistakes. For her destructive compulsions led her to men who demanded everything from her--and returned nothing.

JEREMY-- Nothing would stop him from lying, charming, and conniving his way to becoming England's most successful actor--not even Alyssa's love.

NICHOLAS--He stole Alyssa's passion, her body, and even her will, but he hid dangerous secrets that threatened to ruin their lives.

ANDREW--All the jet-setting movie star's money and fame couldn't compare with the happiness Alyssa gave him and he would do anything to possess her.

Broken and despondent, betrayed by the men she had so desperately craved, Alyssa could only search on for the courage and strength to escape her past and find the one man who could fulfill her...HEART'S DESIRES
Reviews from Goodreads.com