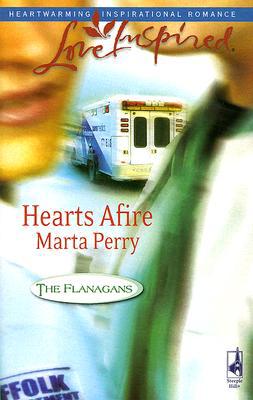 Hope for the Future

Firefighter paramedic Terry Flanagan saw her clinic for migrant farm workers as the perfect way to make a difference. But when Dr. Jacob Landsdowne was assigned to oversee her project, she wondered if her dreams would go up in smoke.

Two years ago a tragedy had touched both their lives and almost destroyed Jacob's career. Now he was intent on rebuilding his reputation, and Terry's clinic was an unwanted distraction. Yet, with the well-being of women and children hanging in the balance, maybe it was time Jacob put aside his trust in himself...and turn to God.
Reviews from Goodreads.com

This story focused on Terry, the youngest of the Flanagans. In this story, Terry is forced to work with a doctor she had a bad experience with. He didn't want to work with Terry any more than she wanted to work with him...

The story focused on a migrant camp clinic where the Mexican workers were treated poorly. The story of Manuela and her family was good. It had a strong beginning and ending. The owners' story, however, was strong in the beginning and through the story, yet was sort of ended abruptly at the end. The romance...well, I was disappointed when the scene took about half a page - as if an afterthought at the end.

Still, the book was interesting. It explains who the character in the next book is, and it explains why the oldest Flanagan, Mary Kate, gets her own romance story. We learn about her husband's death in this one.

It's worth reading as part of the series. The two main characters were well-developed and loving.