Heart of the Storm — Jillian Hunter 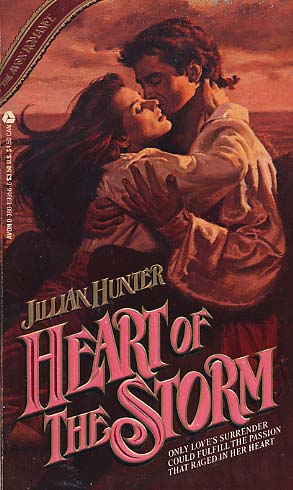 Juliana Pendarvis was outraged. Without consulting her, her father had arranged for her to marry Adam Tremayne, the rough-hewn "colonial" who had come to Cornwall from America. Headstrong and defiant, Juliana insisted she'd marry the viscount who courted her, despite her father's objections.

Now Sir Walter Pendarvis lay gravely ill, his fondest wish the marriage between his daughter and Adam, the son of his old friend. For the sake of her father's health, Juliana agreed to the betrothal, with no intention of allowing a marriage to take place.

But when the handsome, bronze-skinned Adam boldly claimed her, her protests were silenced by searing kisses and shameless caresses that made her heart beat wildly. Trembling with desires she didn't understand, her body urged him closer And in the sweet ecstasy of passion's surrender, they found the love that would be theirs forever.
Reviews from Goodreads.com