Heart of the Mountains — Betty Brooks 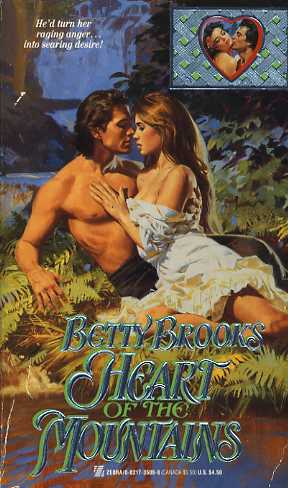 HE WASN'T LEAVING WITHOUT HER.
Danielle Dicker was angrier than a trapped polecat the day dark- haired, dark-eyed Adam Hollister rode onto her Ozark farm. Claiming that some old mountain man needed her help, Adam threw her into his horse's saddle and carted her off toward Texas! Danny wasn't about to be kidnapped without some serious kicking and screaming, yet as the days and nights went by on the perilous frail, she found herself drawn into the sensuous embrace of this tall, broad devil, whose masterful caresses were turning Danny's raging anger.. . into searing desire.

AND SHE WASN'T GOING WITHOUT A FIGHT!
Adam never would've guessed that the Danny Wicker the old mountain man had sent for was a woman--let alone a honey-haired, blue-eyed spitfire! Adam didn't know why it was so important he fetch the chit, but he owed the old man. Trouble was, Danny was wilder than an unbroke filly, and more ornery than an angry mule. Adam had to find a way to tame her on this rough frail. . . and since every inch of her spirited, sweet-smelling skin tempted him something fierce, he figured making slow, passionate love to her would be no hardship for him at all!
Reviews from Goodreads.com