Heart of a Rancher — Renee Andrews 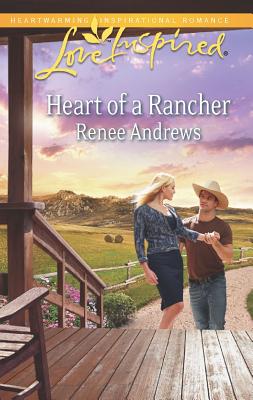 A dude ranch is John Cutter's lifelong dream, but it's one that the banks won't fund. So when a big-city businesswoman invests in the project -- and stays to make the ranch a reality -- John is thrilled. Despite her fancy clothes, Dana Brooks is the opposite of the gal who broke John's heart by leaving the country for the city. Dana's hard work, appreciation for the land and kindness to his family soon has John thinking about forever. But when he discovers her shocking secret, will John lose everything -- or risk it all to believe in love?
Reviews from Goodreads.com

John Cutter has been through a lot already. He's watched both his parents die, raised his brother, helped his other brother get settled after his time in the military, get his brother married and settle...now it's his turn to do what he wants. His dream is to start a dude ranch, and rich businesswoman, Dana Brooks, is just the person to help him. But he's already had one city girlfriend and doesn't plan on going down that road again...

This is just a sweet story. It's a fast read, but is a nice, refreshing story about the poor cowboy and the rich businesswoman getting together to realize what's really important. They both find a spiritual awareness along the way, and maybe they'll be able to find each other.

Renee Andrews does such a wonderful job with her characters and the town of Claremont. I've enjoyed every one of her stories thus far and can't wait to read the next installment! I am very happy with the way this story ends and cannot wait to get Ryan's story (that's Dana's brother).