Heart of a Husband — Kathryn Alexander 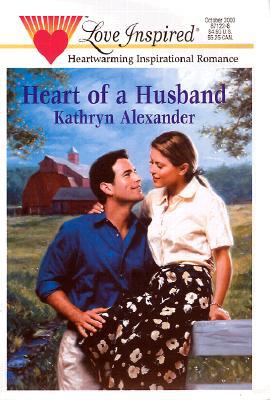 In Jake Barnes's strong arms, Joanna Meccord had once found pure bliss...until he'd left, shattering her soul. Now he was back, and so were Joanna's unsettling feelings for a man who had little faith in himself -- or anything else....

All Jake had ever wanted was to do the right thing for Joanna. After all, she'd been too young to know better than to fall in love with him. Now she was older, wiser -- and so was Jake. He had spent a lifetime learning how love could hurt. Did he dare believe it could also heal?
Reviews from Goodreads.com

The story itself gets a three, but I gave this book five stars for the ending. I absolutely loved it!!!

It had been two years since that fateful night when friends Jake and Joanna shared a passionate kiss in Jake's car after a fun evening out together. Jake ran scared, and Joanna's heart was broken.

But now Joanna's aunt, the only living blood relative she knew, was dying. Jake was the closest thing to a son she had and insisted that the Aunt would come home with him. Joanna had no choice but to follow. But if they thought they could start over as friends, they had more surprises in store for them!

Joanna got a "temporary" job at the local orphanage against Jake's better judgment and befriended one of the orphans there. She also made herself sick thinking of the possibility of Jake going into another doctor's arms. Joanna believed Jake was madly in love with another, and it hurt to even think about it!

The on-again, off-again romance of Jake and Joanna was a it frustrating. The culprit seemed to be lack of communication, and at times Joanna infuriated me.

Then IT happened, and everything in the story changed! The last thirty pages or so made up for the short-comings of the story. The drama was so tense, and the romance was so grand. The proposal was one of the most romantic - I could just picture the whole scene in my head!!!

An epilogue would have been nice - seeing the couple married and adopting the little orphaned boy. Oh well, we can always imagine it happened!