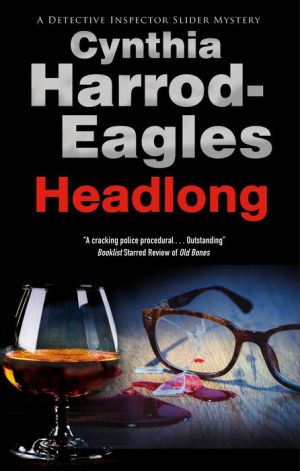 Bill Slider and his team investigate the death of a prominent literary agent in this intriguing contemporary mystery.

When one of London's best-known literary agents is found dead in strange circumstances, having fallen headlong from his office window, DCI Slider is under pressure from the Borough Commander to confirm a case of accidental death. But when the evidence points to murder, Slider and his team find themselves uncovering some decidedly scandalous secrets in the suave and successful Ed Wiseman's past.

An embittered ex-wife. A discarded mistress. A frustrated would-be author. A disgruntled former employee. Many had reason to hold a grudge against the late lamented literary agent. But who would feel strongly enough to kill him? Any leads in the investigation seem only to result in more questions -- not least of which is the identity of the elusive Calliope Hunt. Who is she -- and what is her connection to the train of events?
Reviews from Goodreads.com

Ms. Harrod-Eagles' Bill Slider series is a very cerebral mystery series. Bill Slider is a man who thinks, and thinks, and thinks. At the same time he manages to motivate his very impressive CID team, This team can do just about anything Bill asks them to, and they waste no time with unnecessary questions. I love everything about this series. Bill is a marvellous character, and his musician wife Joanna is the perfect counterpart for him. In this book Slider and his team are called in by the top brass to what appears to be an accidental death. A man has fallen out of his upstairs window to his death. He lands in a construction site with his head bashed in. Top brass inform Bill that it's open and shut and it's an accident. Hurry up and collect the required information and write it up. Why? Bill wonders, and the more he looks at the scene the more little niggles he gets. And of course, being such a deep thinker, he imagines all sorts of other scenarios. Once the autopsy results come back Bill and his team know its murder, so now it's sifting through a seemingly unlimited supply of suspects to find the killer. I found the book started a little slow, but the pace noticeably picked up about halfway through. As usual the book was not an easy one to figure out, and watching this professional team get the answers that they need is always a treat. But the biggest treat is Bill's boss, Porson. As usual he gets his adjectives, adverbs and just about everything else mixed up. It's hilarious to read what he says when he's got a full head of steam going on. Wonderful series, wonderful characters and always a darn good mystery. Slider never disappoints.