He Is Legend — Christopher Conlon 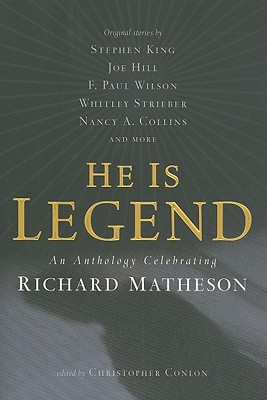 Richard Matheson, the New York Times bestselling author of I Am Legend, has inspired a generation of storytellers. Now, an outstanding cast of top writers pays tribute to his legacy with an all-new collection of original stories set in Matheson's own fictional universes, including sequels, prequels, and companion stories to I Am Legend, Hell House, The Incredible Shrinking Man, Somewhere in Time, “Duel,” and “Button, Button.” Among the highlights of this one-of-a-kind anthology is the first ever collaboration between Stephen King and his son, bestselling horror writer Joe Hill. Other notable contributors include Nancy A. Collins, Joe R. Lansdale, William F. Nolan, Whitley Strieber, F. Paul Wilson, and Matheson's son, Richard Christian Matheson. Previously published as a limited edition by Gauntlet Press in 2009, He Is Legend is now available to Matheson's many fans, as well as all lovers of gripping horror and suspense.
Reviews from Goodreads.com