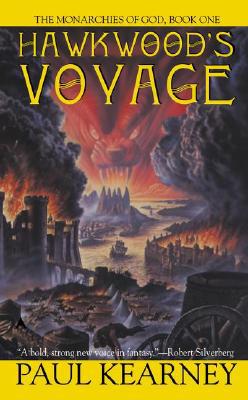 A land in chaos
The once-great Fimhrian nations of the West are falling. From the east, Murduk hordes have taken the ancient Holy City of Aekir, burning the churches and slaughtering their defenders.

A people divided
Even as the war rages, military, religious, and ruling factions clash with one another in a desperate hid for survival--and supremacy. As the armies of the West make a valiant stand against the heathen invaders, and a wave of bloody religious fanaticism threatens to consume the land, one hope lies beyond the horizon.

A man of destiny
Now, rogue mariner Richard Hawkwood is forced to lead an expedition across the Great Western Ocean to find a lost continent of legend, where a safe haven may he found. But before the explorers can find sanctuary, they will have to make a journey that no one has ever survived...
Reviews from Goodreads.com