Have Your Cake and Kill Him Too — Nancy Martin 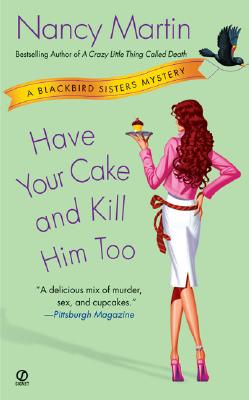 Who knew there could be so much sex in the city of Philadelphia?

Heiress-go-lightly Nora Blackbird is teetering on the brink of losing her job as the city's most talked-about society columnist. Her sisters, desperate housewife Libby and fiercely independent Emma, are exploring their animal natures, with dangerous results. And even as two hot men vie for a long-term place by Nora's side, she learns he's in a delicate condition....

What's a sophisticated girl to do?

Murder is always distracting. Especially when the victim is the tycoon owner of Cupcakes, a spectacularly tacky sports bar known less for its hot wings than for its hot waitresses. Nora trails a secretive politician, a shady former rock star doubling as a pastry chef, and a dangerous aristo-brat on the verge of stardom. She's got a personal life to untangle, and a killer to slap behind bars, before her grandmother's couture gets so snug that he Main Line gossips take notice.
Reviews from Goodreads.com