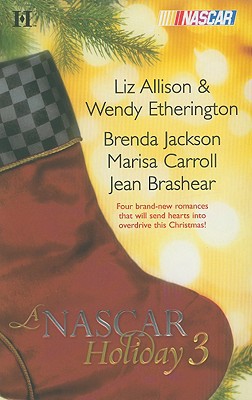 An island romance between Tiffany McMillan, the boss's daughter, and Jesse Harwood, a NASCAR team engineer, is strictly forbidden, but can they keep the passion at bay during a company holiday getaway?
Reviews from Goodreads.com

A NASCAR Holiday 3
Have A Beachy Little Christmas by Liz Allison and Wendy Etherington
Jesse Harwood has the hots for a girl who never looked twice at him in high school….or so he thought. Their boss has brought them all to an Island for a special company getaway and it’s time to stop dragging the past into the present.

Tiffany McMillan does all she can to please her dad and yet she feels like a failure. And then there’s Jesse, a guy who just seems not to like her. After he starts treating her nice she finds that maybe an island fling might be on the menu.

Winning The Race by Brenda Jackson
Five years ago the man Lisa St. Claire loved gave her the shaft instead of an engagement ring. She’s still not over him. For the first time in all those years he has returned to their small town for his best friends wedding. Unfortunately he’s the best man and she’s the maid of honor. Can she be strong enough to hide her love from him?

Myles Joseph never stopped loving Lisa. After seeing and being with her at the wedding he had no choice but to make sure she would be by his side forever. She thinks that NASCAR had pulled him away from her, that he left without looking back. Maybe it was time to tell her the truth about his quick departure.

All They Want For Christmas by Marisa Carroll
On a stormy icy night in Michigan, widower Trace Collier’s life takes a turn when he needs to get out of the bad weather. When Trace and his gifted daughter Annie end up at Carrie Ferrell’s campground his decision to stay with NASCAR or retire becomes tougher than he ever thought.

Carrie’s ex had walked away after an accident that left their son with multiple surgeries and life on crutches more often than not. She learned not to date and depend on men because they always left. The handsome race car driver was no different she told herself even though she was falling quickly for the man and his daughter. Can someone rooted to one place like she is ever even consider a relationship with someone without roots?

A Family For Christmas by Jean Brashear
Gib Cameron was living his dream as the crew chief for a NASCAR team. All the championships couldn’t replace the one empty place in his heart, his lost love. He finally returned home after thirteen years to spend time with his aunt and uncle and wouldn’t you know the first day home he runs into her, the woman who broke his heart.

Cassie Wheeler Maguire couldn’t believe her eyes when her daughter walked up to her with Gib. The man she never stopped loving but had kept a secret and lied to him. And now he’s being nice and bringing her kids presents and getting them all to fall in love with him as well.

Four exciting and heartwarming stories are packed into this Christmas anthology.
**Some of the stories contain mild language
http://justjudysjumbles.blogspot.com/2013/05/harlequin-nascar-library-collection.html