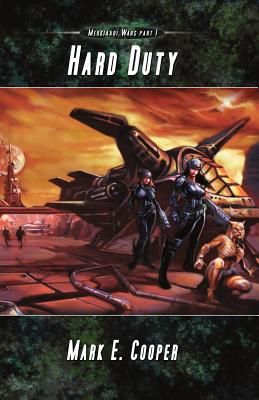 Hostile aliens nearly eradicated humanity. Will the next encounter finish the job?

Sixteen billion dead in the last alien invasion of the Alliance's colony worlds.When survey ship Captain Jeff Colgan discovers a new alien race, he's required to investigate.
As the aliens discover Colgan's ship and begin to hunt him down, the captain's mission changes from one of study to one of survival.
Hard Duty is the first installment in Merkiaari Wars, a military sci-fi of alien invasion and space exploration. If you like realistic engineering, vivid battles, and futuristic warfare, then you'll love Mark E. Cooper's sci-fi work of art.

Interview with the author:

Why did you write Merkiaari Wars?
The easy answer: I love to read science fiction books. All kinds of sci-fi really, but particularly military science fiction. The better but longer answer: stories about space marines in power armour defending us against an alien invasion just excite me. Add a marauding space fleet and give me the chance to write some battles in space and I’m in heaven.
Is Merkiaari Wars an alien invasion story?
Sort of, but it’s bigger than that. Book 1 is about first contact with aliens, but at the same time it’s about what it means to be Human. Given the power to intervene, isn’t it our duty to do that, even if it means fighting a war and dying against a galactic empire determined upon genocide?
Why cyborg soldiers and nanotech?
I could say because they’re cool, but the real answer is that nanotech intrigues me; my engineering background coming through I guess. I’ve always been interested in the latest scientific theories, and research into nanotech. Trans-humanism and genetic engineering are important themes in the Merkiaari Wars Series.
Will Merkiaari Wars ever be a movie?
I would love to see that one day. Readers have compared the books with Universal Soldier and Aliens. I can see why they do that, but the series is really trying to answer the question:
What is Human?
Is it bodies or something more ephemeral? If it isn’t linked to physical form, can an alien species be Human, and what of Artificial Intelligence? The later books in the series try to discover this.