Happy Trails to You — Julie Hecht 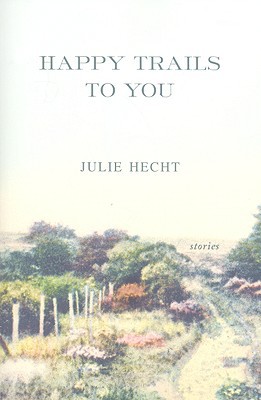 When Julie Hecht's stories first appeared in The New Yorker, her unnamed photographer-narrator became an instant literary icon. Chronicles of her strategies for surviving civilization's decline -- herbal remedies, macrobiotics, a bit of Xanax -- have established her as one of the most captivating and eagerly read voices in modern literature.

In this new collection of stories, Julie Hecht reclaims the darkly funny, existential territory for which she is known: "People say 'Good morning,' but don't believe them. It's just something to say." The uniquely eccentric narrator reappears in Happy Trails to You and recounts her perplexed engagements with our society and the larger world -- whether she's attempting to withdraw money from a bank machine, worrying about Paul McCartney, or seeking a nonexistent place of calm on Nantucket, where nail guns and chain saws have replaced the sounds of birds singing.

Appalled by life in our times, the narrator recounts innumerable artifacts from a now vanished America (civility, idealism, Elvis Presley, well-made appliances). She is also exquisitely attuned to the absurdities of our culture; her acute observations illuminate every subject, from the dangers of microwave ovens to the disappearing ozone layer. With deadpan wit, the author reveals the truths of a new century. Happy Trails to You is a radically distinctive work of American fiction.
Reviews from Goodreads.com