Hannibal's War on Rome: From Cannae to Zama — D.A. Aubrey 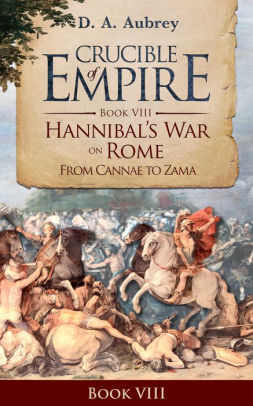 Having harnessed the silver and the fierce tribes of Spain to his cause and with the support of Carthage, Hannibal launches his assault on the Spanish city of Saguntum, thereby provoking the second Roman War. Beset by unrest in Gaul, Illyria, Sardinia and in Etruria, the Romans are slow to react, such that Saguntum falls to the Carthaginians.

Hannibal has entered Gaul before the Romans are encountered. Unsure of his enemy’s strength, Hannibal moves north. Before him rise the towering mountains that separate him from his potential Gallic allies …

At the Ticinus, at the Trebia and then at Trasimeno, the Romans become aware of the tactical genius of their enemy. Desperately, Rome seeks to protect its confederacy. However, the policy of ‘Cunctatio’, the doctrine of avoidance of battle, is repugnant to many Romans. The enemy must be destroyed. Cannae will be the place to defeat the Carthaginian invader…