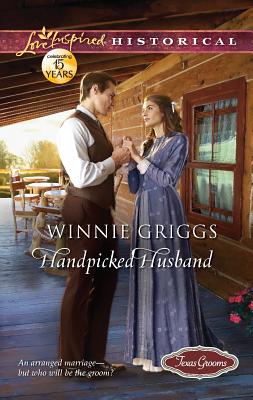 Free-spirited photographer Regina Nash is ready to try. But unless she marries one of the gentlemen her grandfather has sent for her inspection, she'll lose custody of her nephew. So she must persuade them -- and Adam Barr, her grandfather's envoy -- that she'd make a thoroughly unsuitable wife.

Adam isn't convinced. Regina might be unconventional, but she has wit, spirit and warmth. His job was to make sure Regina chose from the men he escorted to Texas -- not to marry her himself! Can they overcome the secrets in her past, and the shadows in his, to find a perfect future together?
Reviews from Goodreads.com

Handpicked Husband by Winnie Griggs
Texas Grooms Book 1
Adam Barr wants to find who set him up and clear his name. He had been an up and coming lawyer and ended up falsely accused and spent the past six years in prison, losing everything. The one person who stood by him the whole time was Judge Madison. So when the Judge asked Adam to take three men from Philadelphia to Turnabout, Texas so his granddaughter could choose one to marry….he did. Of course nothing in his life was ever easy and this hoyden surely wouldn’t make it any easier.

Regina “Reggie” Nash was happy. At twenty-three years of age she had decided to be a spinster aunt to young Jack. She has been taking care of him since Patricia, her step-sister passed away. Since the passing of her brother-in-law four months ago...Reggie has taken of full responsibility for the six year old. Telling her grandfather that she wanted to adopt Jack seemed like a non-issue until he sent the handsome Adam to Texas with an ultimatum. Marry one of the three men Adam had with him or lose Jack.

I enjoy all of this author’s books, this one included. It made me laugh and even brought a few tears. She brings her characters to life. Three men who really don’t want to get married but have been offered a deal too good to refuse. A young woman who has her own secrets and reasons not to marry. And a man carrying a chip on his shoulder with revenge on his mind. Some of the towns people come to life as well. The gossip and snooty woman who thinks no man can refuse her. Looking forward to the rest of this historical series.
**Received through NetGalley for review
http://justjudysjumbles.blogspot.com/2012/04/winnie-griggs-book-list.html#