Hand of the Impostor — Paula Minton 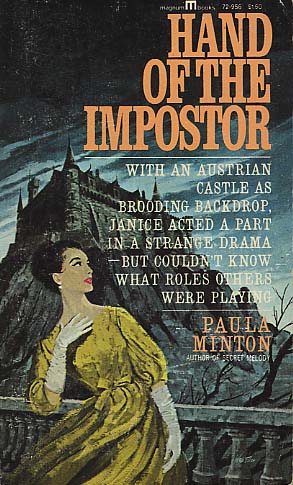 JANICE MATSON was kidnapped from an English orphanage to he thrust into the middle of a strange conspiracy--a colorful tapestry of action and emotion which some threads were the simple motives of greed and hate, but others bordered on insanity and worse.

THE PRIZE was a cache o jewels hidden somewhere in a forbidding, ancient Austrian castle. Reluctant Janice agreed to assist it their recovery and return their rightful owner--but she did not know the real stakes in the game she was forced to play, or the hidden forces that clashed in the darkness around her.

HER ASSIGNMENT, posing as the wife of the man who had abducted her, was alien enough to her honest, straightforward nature. But then she learned that one else in the castle was what he seemed to be, either -- and the drama reached its peak as unseen hands pulled sinister puppet-strings...
Reviews from Goodreads.com