Hand Me Down — Melanie Thorne 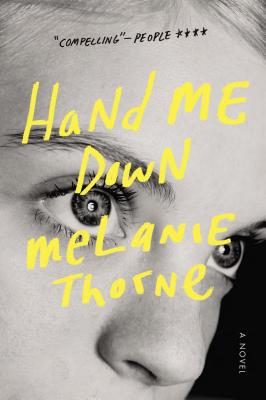 A tough, tender, debut novel, in the tradition of Dorothy Allison and Janet Fitch, Hand Me Down is the unforgettable story of a girl who travels between California and Utah in search of her true family, having never been loved best of all.

Fourteen-year-old Elizabeth Reid has spent her life protecting her sister, Jaime, from their parents' cruel mistakes. Their father, who'd rather work the system than a job, pours every dollar into his many vices, denying his daughters the shoes and clothing they need. Their mother, once a loving parent, is going through a post-post-adolescent rebellious streak and finds love with a dangerous ex-con. When she chooses starting a new family over raising her first-born girls, Elizabeth and Jaime are separated and forced to rely on the begrudging kindness of increasingly distant relatives.

A string of broken promises that begins with Liz's mother swearing, "I would never hurt you, Liz. You're family," propels her between guest beds in two states searching for a safe home. All the while, Liz is burdened by her stake in a bleak pact with a deceitful adult: to tell the truth about the darkest of her circumstances will cost her the ability to shelter Jaime. As Liz spirals into the abyss of fear and shame that haunts her sleepless nights, can she break free from her bonds in time to fight for her life?

Thorne writes with a command of language that is at once affecting and enticing. Her debut is the kind of voice-driven reading experience fiction lovers crave.
Reviews from Goodreads.com