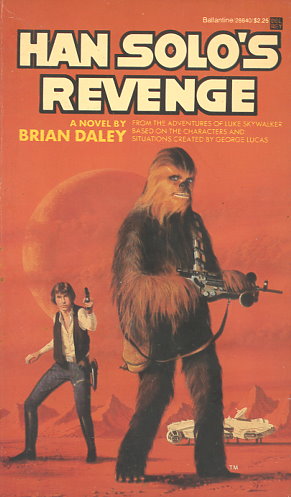 There's always work for a space-faring freighter captain who doesn't ask awkward questions, and Han Solo quickly got a job that would pay him a cool 10,000 credits. It would also, he discovered as soon as he made planetfall to pick up his cargo, earn him and Chewbacca summary execution. The Corporate Sector Authority could overlook many crimes, but the slave trade carried with it mandatory capital punishment.

Thanks to the quick thinking of Blue Max, computer-partner of Han's work 'droid Bollux, Han was able to turn the tables on the slavers and free their captives. But he and Chewie were dead broke, with not many prospects in sight.

Figuring that somebody still owed him 10,000 credits, Han kept a rendezvous the slavers had arranged with their shadowy boss. But the lovely girl who kept the date didn't fit his idea of a slave trader. And she wasn't...

Rather, Fiolla was a full-fledged officer of the Sector Authority... most of whose laws Han had already
broken. Now he was in real trouble!