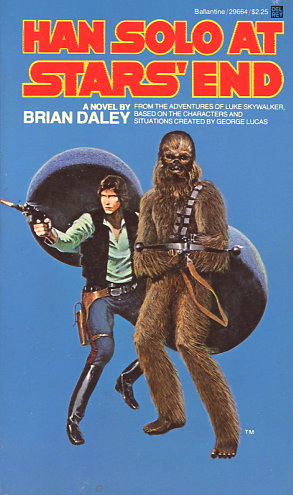 Han Solo was a trampfreighter captain, a smuggler and a free-lance law-bender when it suited him. Together with his Wookiee pal Chewbacca, he roamed the galaxy in the starship Millennium Falcon, --owing nothing to anyone -- human, 'droid or otherwise. If the Authority took a dim view of some of his activities,'well, that was the Authority's problem.

Or so Han Solo thought.

Then the Authority informed him he would have to bring the Millennium Falcon up to certain specific technical standards. "Safety standards;' they had said -- but Han knew better. He also knew a safe planet where Doc fixed up starships -- no questions asked. Unfortunately Doc had disappeared.

His daughter Jessa was willing to make the necessary repairs; she was even willing to provide the waiver that would keep investigators out of Han's starship for a long time. All Han and Chewbacca had to do was pick up some undercover agents at the Authority Data Center on Orron III and then find Jessa's father.

Unfortunately neither Han nor Chewbacca could foresee the incredible twists of fate that would pit them against powerful and ruthless enemies bent on their destruction...events that would drive them to a place of rocky desolation, an airless speck few star charts even knew existed -- the ominously quiet Star's End!
Reviews from Goodreads.com