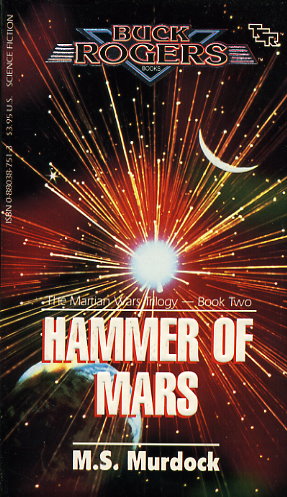 Reeling from a series of embarrassing defeats at the hands of Buck Rogers and the NEO freedom fighters, RAM unleashes its formidable powers. Knowing that he has no chance unaided against the corporate empire, Buck sets off in search of allies from the inner planets.

Venus is a hostile, terraformed landscape. "Normal" humans dot the major continents of Elysium and Aphrodite and sail the atmosphere in huge aerostates. The Lunar Colonies are isolationist, threatening mass destruction to anyone who endeavors to undermine their will. Mercury is controlled by a royal family of Sun Kings with deep ties to RAM, which hoards the energy and metal of Mercury. And deep in the Asteroid Belt, space pirates and fierce survivalists lie in ambush.

Hammer of Mars, the second book in The Martian Wars Trilogy, is set in the conceivable 25th century world of Buck Rogers.
Reviews from Goodreads.com