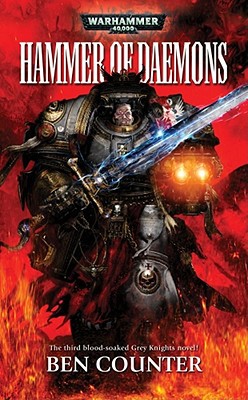 Share:
The 3rd installment in the Grey Knights trilogy by Ben Counter

When the forces of the Imperium suffer a crushing defeat by Chaos, Grey Knight Alaric is captured and taken back to Sarthis Majoris, a daemon world in the Eye of Terror.

Stripped of his armour and weapons, he is forced to fight as a gladiator for his daemonic masters, who worship their god Khorne with endless slaughter. His only chance of escape is to find the Hammer of Daemons, a legendary weapon with the power to destroy the forces of Chaos.

As Alaric is forced to fight more and more dangerous opponents, he must not only triumph in combat, but work out a way to escape, for even a Grey Knight cannot resist the dark powers of corruption forever.