Half of a Yellow Sun — Chimamanda Ngozi Adichie 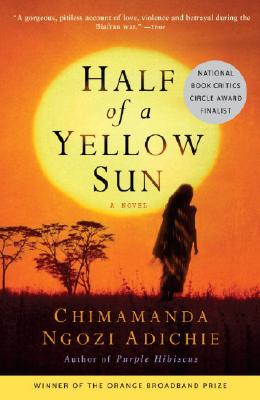 With the effortless grace of a natural storyteller, Adichie weaves together the lives of five characters caught up in the extraordinary tumult of the decade. Fifteen-year-old Ugwu is houseboy to Odenigbo, a university professor who sends him to school, and in whose living room Ugwu hears voices full of revolutionary zeal. Odenigbo's beautiful mistress, Olanna, a sociology teacher, is running away from her parents' world of wealth and excess; Kainene, her urbane twin, is taking over their father's business; and Kainene's English lover, Richard, forms a bridge between their two worlds. As we follow these intertwined lives through a military coup, the Biafran secession and the subsequent war, Adichie brilliantly evokes the promise, and intimately, the devastating disappointments that marked this time and place.
Reviews from Goodreads.com

Great literature is a wonderful way to get a history lesson. Especially when a book is as well-written as this one. This book is about the short-lived history of Biafra. Biafra was an attempt by a small area in Nigeria to form their own country. There were a lot of ethnic and cultural tensions in Nigeria in the mid-60's. The tiny secessionist country was made up of mostly Igbo people, and the catalyst that really forced their hand to secede was a massacre of Igbo people by the Nigerians in 1966. The tiny country of Biafra was formed. The book covers this time frame as well as the entire Biafran war which ran from 1967 to 1970. It is rather timely to read about a catastrophic civil war such as this one was. There is so much civil unrest in the world today, and history has taught us that no one wins when countries take up arms against their own people. The casualties are usually enormous and tensions run extremely high so it's like living on a powder keg. Even those of us who live in relatively peaceful countries away from the maelstrom don't win. The horrific stories and the atrocities reduce our capabilities of feeling compassion because civil unrest is so prevalent. We think, "Oh, it's just another case of people fighting amongst themselves." This book utilizes a no-holds-barred approach to the Biafran war and we see the personal toll on the people who lived through it through the eyes of Ms. Adichie's characters. So many people died in this three-year span. Starvation was actually the cause of the most fatalities. The suffering that these people went through is horrific, and to think it came from their own countrymen. More than one million people died during this war. Ms. Adichie's characters are wonderfully drawn. The main three characters are an African university professor, his lady-love who comes from a priviliged Igbo family, and young thirteen year old Ugwu who is employed as houseboy by the professor. It shows their life before the secession and their lives as they flee over and over again from the carnage. It was a hard book to read because of the tragedy of this war, but there was hope here as well, portrayed so well by Ms. Adichie's wonderful characters. This is a book that I'm glad that I read. An important work that will be appreciated for many years I think. Wonderful job. 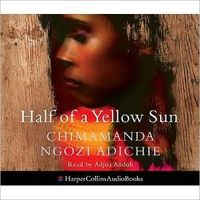