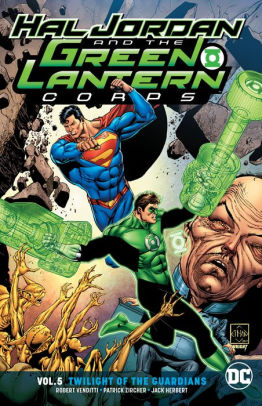 It's action, adventure and conspiracy on a cosmic scale in Hal Jordan and the Green Lantern Corps Vol. 5: Twilight of the Guardians, as writer Robert Venditti (The Flash) and artists Patrick Zircher (Superman: Action Comics) and Jack Herbert (Superwoman) team up Hal Jordan with his greatest allies against his deadliest foes!

The word is out: Sinestro has returned. Wherever this tyrannical former Lantern goes, hell is sure to follow. And when Hal Jordan travels to Earth to bring his former partner to justice, hell is exactly what he finds. Another of his oldest enemies is under attack from a surprising source, and he's unleashed all his powers to save his skin. If that means harnessing the evil entity called Parallax to corrupt the world's greatest hero, Superman, so be it.

But an even greater threat than a mad Man of Steel awaits the Emerald Knight. From the darkest depths of the cosmos, the all-powerful Controllers have returned, threatening to settle their ancient grudge against the Guardians once and for all. It will take a strike force of Earth's first four Lanterns--Hal Jordan, John Stewart, Guy Gardner and Kyle Rayner--to save their old mentors and the universe. If the Lanterns fail, all of creation will pay the price.

Collects Hal Jordan and the Green Lantern Corps #30-31 and #33-36.
Reviews from Goodreads.com