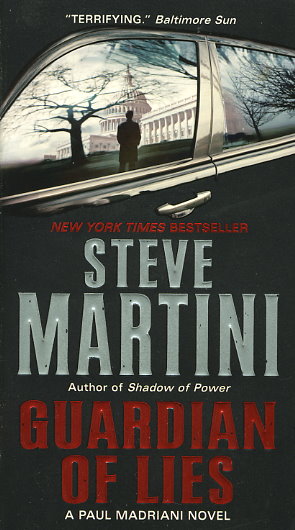 Share:
A woman is looking for a way to flee a darkened San Diego beach house where she has been held a virtual prisoner by a wealthy man ... just as a killer enters the mansion on a terrifying mission of blood and carnage.

Fate has bound attorney Paul Madriani to a young Costa Rican woman accused of a horrific crime, ensnaring them both in a frightening conspiracy that ranges beyond U.S. borders. A Cold War nightmare is being reshaped for a new century -- a threat too terrible to imagine yet too real to be ignored -- leading Madriani, his partner Harry Hinds, and the fugitive Katia directly into the path of an unstoppable, very angry assassin. From the halls of American justice to the jungles of South America and a dark secret buried since the days of Castro's ascendance, the race is on to prevent the unthinkable -- by unveiling the hidden truth protected by the "Guardian of Lies."