Growing Up with Tamales — Gwendolyn Zepeda 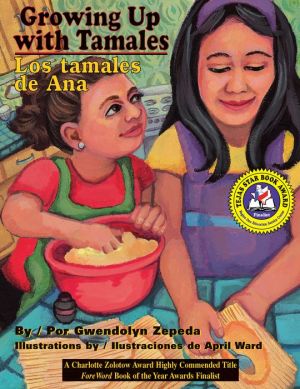 And so the years pass, and Ana turns eight, ten, twelve, fourteen, sixteen. But every year, big sister Lidia is always two years older. Ana envies her elder sibling and wishes she could do what Lidia does: put just the right amount of meat inside the tamales and roll them up; steam the tamales without scalding herself with the hot, hot steam; chop and cook the meat for the tamales without cutting or burning her hands.

When she turns eighteen, though, Ana knows she will keep making tamales and she will be able to do all of the steps herself in her very own factory. When Christmas comes around, Ana will deliver tamales to all of her customers around the world, in delivery trucks that say “Ana’s Tamales.” And, Ana thinks, if her sister Lidia wants to, she can work for her!