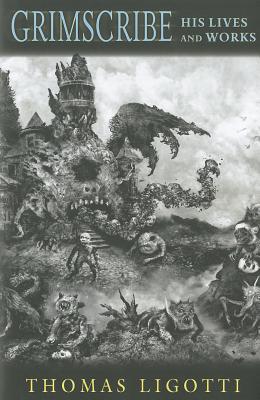 Share:
Grimscribe: His Lives and Works is the second volume in a series of revised, definitive editions of the horror story collections of Thomas Ligotti. First published in 1991 by Carroll & Graf in the United States and Robinson Publishing in England, Grimscribe garnered significantly more recognition than Ligotti's first collection, Songs of a Dead Dreamer, which was issued two years earlier by the same publishers.

In the view of many commentators, it was with Grimscribe that Ligotti consolidated his reputation as a horror writer of high stature. As Steven J. Mariconda remarked in a 1992 essay surveying the stories in Songs of a Dead Dreamer and Grimscribe: "Of the two collections, Grimscribe achieves near-classic status and is recommended to all." Included in this volume is "The Last Feast of Harlequin," a novella that, in the observation of H. P. Lovecraft scholar and biographer S. T. Joshi, "may perhaps be the very best homage to Lovecraft ever written."

Like the stories in Songs of a Dead Dreamer, the first title of Ligotti's to be published in a revised, definitive edition by Subterranean Press, those presented here in Grimscribe: His Lives and Works have been amended to realize the full artistic aims of the originals rather than to compose new versions of these works. This volume may thus be considered, in the manner of its predecessor in this series, as both as a reissue and the culminating specimen of its master effort of twenty years ago.