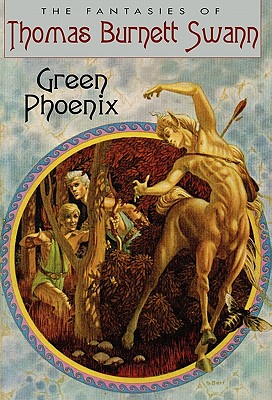 
Thomas Burnett Swann (1928-1976) earned a distinguished reputation among writers of science fiction, one that caused his enthusiastic following to nominate him again and again for awards. Unique in his talent, his novels dealt not with the far future, but with the enigma of the past. Prior to the dawn of human history, the Earth did not belong solely to humanity -- there were other intelligent species still fighting a last-stand battle against extinction. These are the beings remembered today only in legend, creatures of the trees and water, beings that combined beast and man, with strange lore of their own and sciences lost to the human victors. GREEN PHOENIX is a tour-de-force of the final stronghold of the prehumans against the last legion of fallen Troy. "He writes his own golden thing his own way..." --Theodore Sturgeon, The New York Times "Swann's neo-romantic fantasies of the past are unique. He uses the stuff of myth with twists and inventions all his own." --The Village Voice After being unavailable for many years, the complete works of Thomas Burnett Swann are being reprinted by Wildside Press -- all 16 novels and the complete short stories.