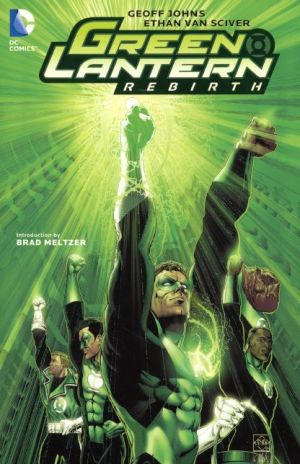 Hal Jordan was once regarded as the greatest Green Lantern of them all--high praise, considering that the intergalactic Green Lantern Corps traced its history back billions of years. But his vast power eventually corrupted him, and in a failed effort to remake the universe using the nearly unlimited energy of the Lanterns' Central Power Battery, he slaughtered his comrades-in-arms and destroyed the entire Corps.

After his downfall, Hal vanished--only to reappear when the Earth was threatened by a stellar apocalypse. To save his home world, he made the ultimate sacrifice--an act that did not go unnoticed in the celestial sphere. Jordan's soul was picked to inhabit the Spectre, the supernatural embodiment of the wrath of God. In his new form he turned the astral avenger into a spirit of redemption while seeking a peaceful end to his existence. But fate was not done with Hal Jordan yet.

This special deluxe edition collects all six issues of the bestselling miniseries together with Johns's original series proposal, his full script for issue #1, and sketches and promotional art from Van Sciver, as well as the breathtaking story "Flight" illustrated by Darwyn Cooke."
Reviews from Goodreads.com