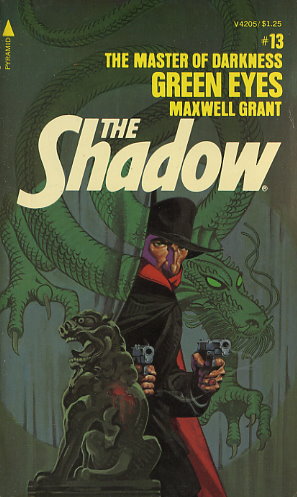 Share:
WHO KNOWS WHAT EVIL LURKS IN THE HEARTS OF MEN?

While his fellow passengers slept on the speeding train, a man named Stephen Laird was pursued--and stabbed to death, leaving one baffling message: "Green Eyes."

Now Federal investigator Cleve Branch moved through the sinister recesses of China Town. How was a secret organization called Wu-Fan linked to the murder? What did its inscrutible leader, Ling Soo, know of "Green Eyes"? Branch would risk his life to find out...

But another man, too, had come to China Town. Cloaked in darkness, possessed of swift and cunning abilities, this dread avenger of evil followed in Branch's wake--for wherever grim death lurked, ready to claim its unwary victims, so did The Shadow!