Got It Bad — Christi Barth 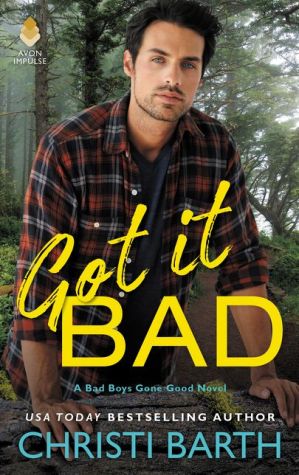 Kellan Maguire was a semester away from becoming a lawyer when his life imploded. Now he's in Witness Protection, hiding from the mob and mad as hell that his brothers lied to him about, oh, everything. The only bright spot in his new life is their drop-dead-gorgeous U.S. Marshal handler. Yeah, he wants to handle her... a lot.

Federal Marshal Delaney Evans has protected her fair share of dangerous criminals. But Kellan is a whole different kind of dangerous -- dangerously hot, to be specific. The charming, handsome, and utterly law-abiding Maguire brother got under her skin the moment they met and the more time she spends with him, the harder it is to deny their attraction. Delaney's willing to give Kellan one night -- to get him out of her system -- and then it's over.

Except one night isn't enough and soon they're breaking every rule of WITSEC to be together. Kellan's got it bad for her, but Delaney's career, her entire life, would fall apart if anyone found out. And then the biggest complication of all hits…