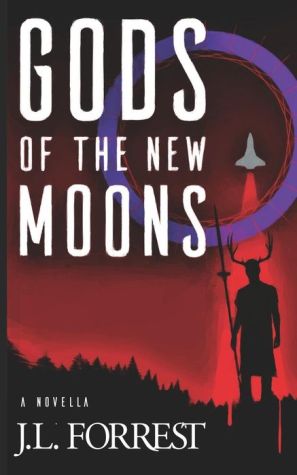 Share:
Launched from orbit.
Crashed in hostile territory.
And the infant he carries won't stop crying.
Thus Aurelius begins his mission, a race to penetrate the very heart of the Faen, the territory of the Queens of the Horned Lord. He must reach them alive. He must reach them across a land of killers. He must reach them before he runs out of baby formula.
And as a man of reason from a high-tech world, he must reach them with his sanity intact.
For there in the Faen, dark Gods and madness await him.
Join Aurelius on his journey. Read Gods of the New Moons today.
Gods of the New Moons is a novella of science fiction and dark fantasy, the sequel to When the World Ends, and the second book of the Songs at the End of the World. J.L. Forrest is an award-winning writers and an Active member of the Science Fiction and Fantasy Writers of America.