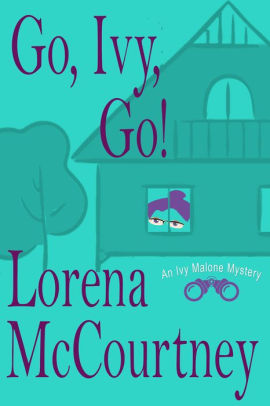 
Ivy Malone is back! This "invisible" LOL (little old lady) has been on the run, hiding out from the vengeful Braxtons, for almost three years now. With an unlikely propensity for getting tangled up in murder, and with the threat of the Braxtons always on her heels, they have not been dull years. Friend (boyfriend?) Mac MacPherson is usually around too, hints of marriage occasionally surfacing - but always sinking.

But Ivy's longing for home back in Missouri has been growing ever stronger. Now, with the Braxtons' interest in her apparently over, a letter offering to buy her house, and a sign from the Lord, she happily decides it's time to return home.

Mac, however, is less than happy about her decision. When she heads for Missouri, he goes a different direction, a parting with a dark finality.

Okay, fine. She can live without Mac, can't she? Once back on Madison Street, the area looks more rundown than when she left and her house a little shabby, but she's still so very glad to be home.

Until she discovers an unpleasant surprise in the upstairs bathtub, a surprise that makes her wonder if she misinterpreted the "sign" from the Lord, and maybe coming home was a big mistake. Because it definitely appears she has not been forgotten by the Braxtons after all.