Gifts from the Sea — Natalie Kinsey-Warnock 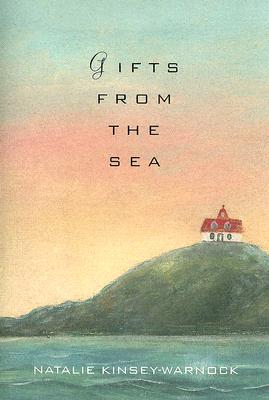 Quila MacFarlane is devastated by the death of her mother, especially now that it’s just her and her father on Devils Rock where her father is the lighthouse keeper. They can’t leave and almost no one ever comes to visit them. But the morning after a storm, something floats ashore that changes their lives forever: Two small mattresses strapped together, and inside, a baby! They name her Cecelia, which means “a gift from the sea,” and call her Celia. She makes them a family again–and helps heal the hurt left by Quila’s mother’s passing. Two years later, though, another stranger arrives, one who changes everything all over again: A woman named Margaret, come looking for the final resting place of her sister, whose ship had gone down in a storm two years before. Her sister’s baby had never been found, either, she explains, and now she has no family of her own. Could this be Celia’s aunt? Will Quila have to give up Celia so Margaret can have her own family back? This is a gripping tale full of love, loss, and healing. Natalie Kinsey-Warnock is the author of many wonderful books for young readers.
Reviews from Goodreads.com