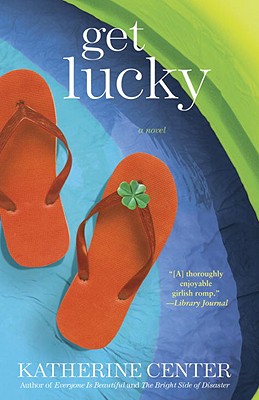 How do you change your luck? Katherine Center's marvelously entertaining and poignant new novel is about choosing to look for happiness--and maybe getting lucky enough to find it.

Sarah Harper isn't sure if the stupid decisions she sometimes makes are good choices in disguise--or if they're really just stupid. But either way, after forwarding an inappropriate email to her entire company, she suddenly finds herself out of a job.

So she goes home to Houston--and her sister, Mackie--for Thanksgiving. But before Sarah can share her troubles with her sister, she learns that Mackie has some woes of her own: After years of trying, Mackie's given up on having a baby--and plans to sell on eBay the entire nursery she's set up. Which gives Sarah a brilliant idea--an idea that could fix everyone's problems. An idea that gives Sarah the chance to take care of her big sister for once--instead of the other way around.

But nothing worthwhile is ever easy. After a decade away, Sarah is forced to confront one ghost from her past after another: the father she's lost touch with, the memories of her mother, the sweet guy she dumped horribly in high school. Soon everything that matters is on the line--and Sarah can only hope that by changing her life she has changed her luck, too.
Reviews from Goodreads.com