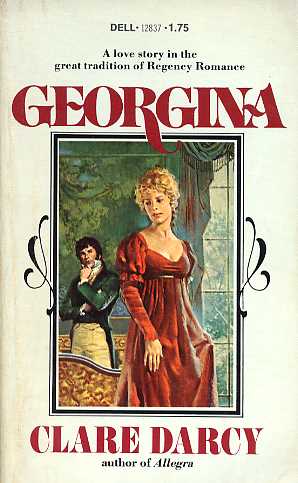 A dead bore! Miss Georgina Powers concluded after shutting the door in the face of her latest suitor, announcing to one and all that spinsterhood was preferable to a life with a dimwit twice her age. She longed for a love match, not the humdrum offers that came her way. But as the granddaughter of Lady Mercer, Georgina was expected to make a shrewd alliance of the first order. And now after refusing this most eligible suitor she was being shipped off to distant relations in the wilds of Ireland, where sheer boredom would force her to reflect on her folly. To the surprise of both Georgina and her disapproving grandmama, the Emerald Isle yielded the roguish Mr. Shannon, a handsome Irishman with a most scandalous past. Georgina was sure to set the ton on its ear with her choice of a groom, but for all the wrong reasons!
-------------------------
UK Edition

When Georgina refuses the hand of the eligible but tediously dull Mr Smallwoods, her grandmother packs her off to Ireland in disgrace. The first person she meets there is Mr Shannon, who had eloped with Georgina's cousin, and now owns the family estates. Mr Shannon is wild and rakish, and his wife's early death is still the subject of speculation among the County families; certainly he is the last person who should be permitted to pay his addresses for the second time to an heiress.

But Georgina's charm and high spirits soon prove a match for all the family and the local gentry, even the scandalous Mr Shannon himself.