Games of the Underworld — Judith Geary 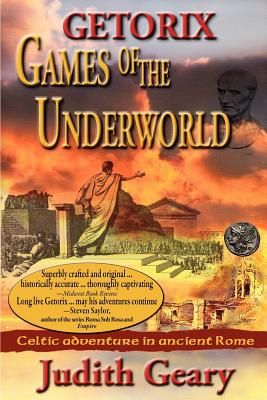 
Superbly crafted and original ... Historically accurate ... thoroughly captivating —Midwest Book Review Long live Getorix ... may his adventures continue —Steven Saylor, author of the series Roma Sub Rosa and Empire Raiders clad only in blue paint and Celtic helmets strike in the heart of Rome’s wealthiest households – at a monument to a Roman victory over the Celts. Lucius Lutatius, son of the Roman general, is taken prisoner and the bull’s head device found at the scene points to involvement by Getorix, son of the defeated Celtic leader. Getorix, aided by two slaves from the Lutatius household and an old druid, must rescue Lucius from the raiders, then save him from members of his own family if Getorix is to fulfill his vow to honor his father with a sacrifice in his homeland. Based on the historical events of 100 BCE. The time, after the Roman victories at the battles of Aquae Sextiae and Vercellae, at the beginning of Gaius Marius’ sixth term as consul, marked the pivot point between the Roman Republic and the Empire. Compelling tale of ancient Rome. The fully-realized characters make the past come alive for readers of any age. – Sharyn McCrumb, best-selling author of The Ballad of Tom Dooley Authentic setting, dialogue, and characterization beckon readers to travel to worlds of long ago. ... the themes... are as applicable today as they were in the past. – Foreword Magazine Thoroughly grounded in the world of ancient Rome, ... gives the reader a contemporary sense of being there ... mental adventure film keeps the pages turning. – Gloria Houston, best-selling author of Miss Dorothy and Her Bookmobile Rome at the height of its power, when political and social intrigue ran rampant. ... hard to imagine a more exciting ... introduction to this vital period in our history. – Terry Roberts, Director of the National Paideia Center, author of A Short Time to Stay Here Swiftly moving action story ... Great attention to detail ... wonderful – N.S. Gill, Guide to Ancient/Classical History, About.com