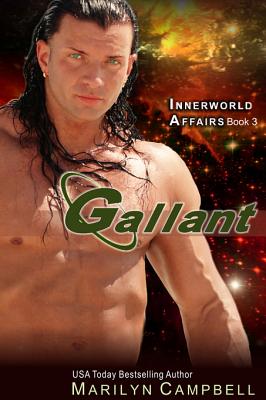 
Cherry Cochran, a feisty Terran actress in Innerworld, witnesses the murder of an intergalactic trader. When Gallant Voyager, an agent for the Consociation, sees the victim speak his final words to Cherry, he kidnaps her "for her own protection."
Gallant needs his prisoner's cooperation to discover why the trader was permanently silenced. But he has no idea how much trouble he's brought aboard his ship. While tracking the killer to a distant galaxy, his verbal battles with Cherry turn physical as primitive passions burn away their differences.
Then Cherry discovers Gallant's truth: he is slave to the barbaric alien behind the murder, and there's a double-cross in the works.
With her own life in danger, Cherry faces a choice: put on the performance of her life to escape the captor she's come to love and warn the Consociation of impending invasion, or rely on a suspicious offer of help from one of the barbarians to save her lover.
Previously titled: Stardust Dreams
REVIEWS:
"Stunning..." Affaire de Coeur
"Marilyn Campbell simply excels in futuristic romance. Nobody does it better " Heather Graham, New York Times bestselling author of The Night Is Watching
The Innerworld Affairs Series, in order
Romulus
Falcon
Gallant
Gabriel
Logan
Roman
MEET MARILYN CAMPBELL:
Marilyn Campbell is a USA Today Bestselling author and a true thrill-junkie who believes a great roller coaster ride can cure whatever ails her. Marilyn resides in the Sunshine State, with her four-legged companions, Milk-Dud and Sweetie.