Fury of a Viking — Sky Purington 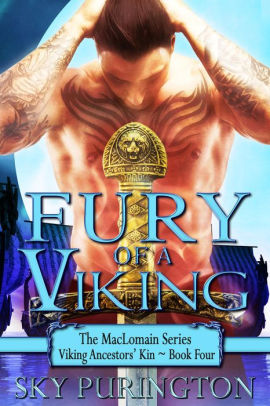 
Shannon usually prefers the dead to the living. But then running a funeral parlor offers a different perspective. Peace and escape. Or at least it did until the day she's summoned by her sister to their Winter Harbor chalet in Maine. Now she knows the truth. The veil between worlds is far thinner than she thought. In fact, it's so thin she and her daughter Emily slip back in time.

Of dragon blood, Matthew Sigdir has suffered more loss than most. A wife. Sister. Now, because of a vicious enemy, possibly his son, Håkon. Infuriated, determined to find his child, he heads north over unforgiving land. What he doesn't expect is a twenty-first century little girl and her beautiful mother, Shannon, to join him on his quest. Nor does he expect Hel to show them favor. And there's no turning away Loki's daughter when she offers help. Now they have to navigate not only through the elements of a wicked Scandinavian winter but Helheim itself, the underworld of the dead.

While they travel, Matthew and Shannon are forced to face their pasts. What they left behind and all that haunts them. As they do, old wounds heal. Hope grows. Love sparks. Through it all, Emily leads them ever closer to Håkon. She's the key. But is it already too late? Will they make it in time to save Matthew's son? Or is the enemy one step ahead of them?

***This book contains sexual content and is recommended for a mature audience.***