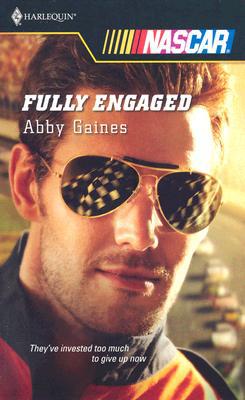 Surprisingly, Will's team owner Gideon Taney decides to oversee the sponsorship bid personally. Handsome, accomplished and notoriously aloof, he raises plenty of eyebrows on the circuit with his sudden renewed interest in the team.

Working long hours together, Sandra and Gideon struggle to keep each other at arm's length--they want the same thing for the team, but for very different reasons. Just how much will each one risk to secure a sponsor...and how much will they conceal?
Reviews from Goodreads.com

Fully Engaged by Abby Gaines
Harlequin NASCAR Library
Secrets And Legends Series Book 4
Sandra Jacobs of Motor Media Group is in trouble. She needs to find a sponsor for Will Branch and quick. Buying out her partner and needing money for other obligations puts her in a bad financial state. And with the threat of losing Taney Motorsports hanging over her head….time is running out.

Gideon Taney finds he enjoys sparring with the stubborn PR woman. That don’t mean he won’t fire her if she can’t control his driver. And she has the nerve to try and make him feel bad for some decisions he’s making. Too bad. It’s his life and he believes it should be every man for himself. Don’t he?

The story line continues as the woman who is adding stress to the Branch family comes into the NASCAR picture along with the man who stole Sandra’s dad’s business, in her mind anyways. The reader gets a better picture of Will and Bart Branch as well. We first met Sandra Jacobs in A NASCAR Holiday 2: The Natural, as Danny Cruises PR person. The story continues in the fifth book, Slingshot Moves.
http://justjudysjumbles.blogspot.com/2013/05/harlequin-nascar-library-collection.html