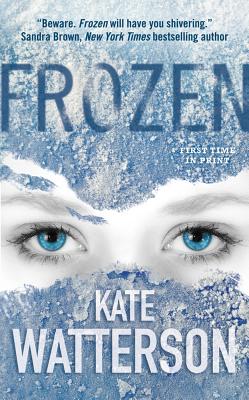 Share:
In Kate Watterson's thrilling suspense novel "Frozen," Bryce Grantham wants a quiet vacation at his family's cabin. On his first night in town, he meets a lovely girl at a bar and gives her a ride home. The next day, he finds her cell phone in his car. When he tries to return it, Bryce discovers that the young woman has vanished, leaving behind only a bloody shoe.

Suddenly Bryce Grantham is the primary suspect in a murder investigation.

Detective Ellie MacIntosch has a serial killer on her hands, but without a body, she has few leads and the stalled investigation has her on edge. Bryce Grantham seems to be the perfect suspect.

Eighteen months have gone by without a clue, and yet Grantham starts reporting stumbling across the bodies of the missing women with unbelievable frequency. The evidence against him is almost irrefutable...but Ellie's gut tells her the case is not so cut and dry.

Before Ellie compromises the investigation, her career, and possibly her life in order to prove Bryce's innocence, she must determine whether he is a manipulative, cold-blooded killer...or the victim of a madman playing a sickening game.