From Here to Reality — Steven Schindler 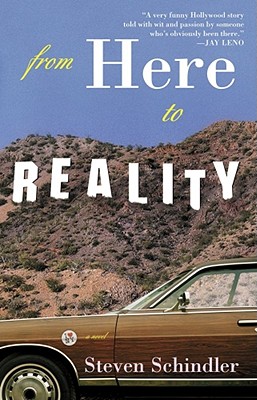 Share:
Sometimes life is stranger than reality TV.
When Johnny Koester is laid off from his TV production job in New York, he moves west, landing in Los Angeles just as the ashes from the riots are settling. The only job he can find is in the burgeoning new field of "reality television," and suddenly Johnny's working like a dog on Shocking Hollywood Secrets and, better still, Psychic CrimeBusters.

Unfortunately for Johnny, life at his new home in Hollywood Court View is even more bizarre than his work. Plagued from day one by his mysterious neighbor, Benny, Johnny soon finds himself following clues having to do with old baseball scorecards and Tony Bennett songs -- and inadvertently setting into motion a series of events that will reveal Benny's deep, dark East Coast past. The only thing going right in Johnny's life is Joan -- the director of a shelter for runaway teens -- who has a heart of gold and a body that makes him weak. He interviewed her for one of his shows, and sparks definitely flew. But will she still love him when Shocking Hollywood Secrets hits the air?

Putting his own quirky spin on the classic tale of a New York transplant in L.A., Steven Schindler has penned a hilarious tale of underworld intrigue, whirlwind love, and the somewhat difficult birth of a TV phenomenon.