Friend of the Devil — Peter Robinson 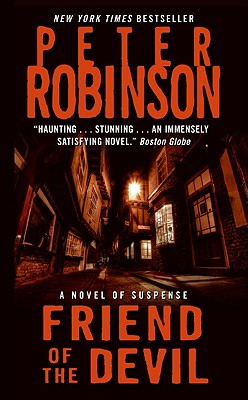 One morning in March, on the edge of a cliff overlooking the sea, a woman named Karen Drew is found in her wheelchair with her throat slit. Back in Eastvale on that same morning, in a tangle of narrow alleys behind a market square, the body of Hayley Daniels is found raped and strangled.

On loan to a sister precinct, Detective Inspector Annie Cabbot draws the first case. Karen Drew seems to have lived a quiet and nearly invisible life for the past seven years. Try as she might, Annie turns up nothing in the woman's past that might have prompted someone to wheel her out to the sea and to her death.

Meanwhile, in the Hayley Daniels murder, Chief Inspector Alan Banks has suspects galore. Everywhere she went, the nineteen-year-old student attracted attention. Anyone could have followed her on the night she was out drinking with friends, making sure she never made it back home.

Then a breakthrough spins Annie's case in a shocking and surprising new direction, straight toward Banks. Coincidence? Not in Eastvale. Banks and Annie are searching for two killers who might strike again at any moment and with bloody fury.